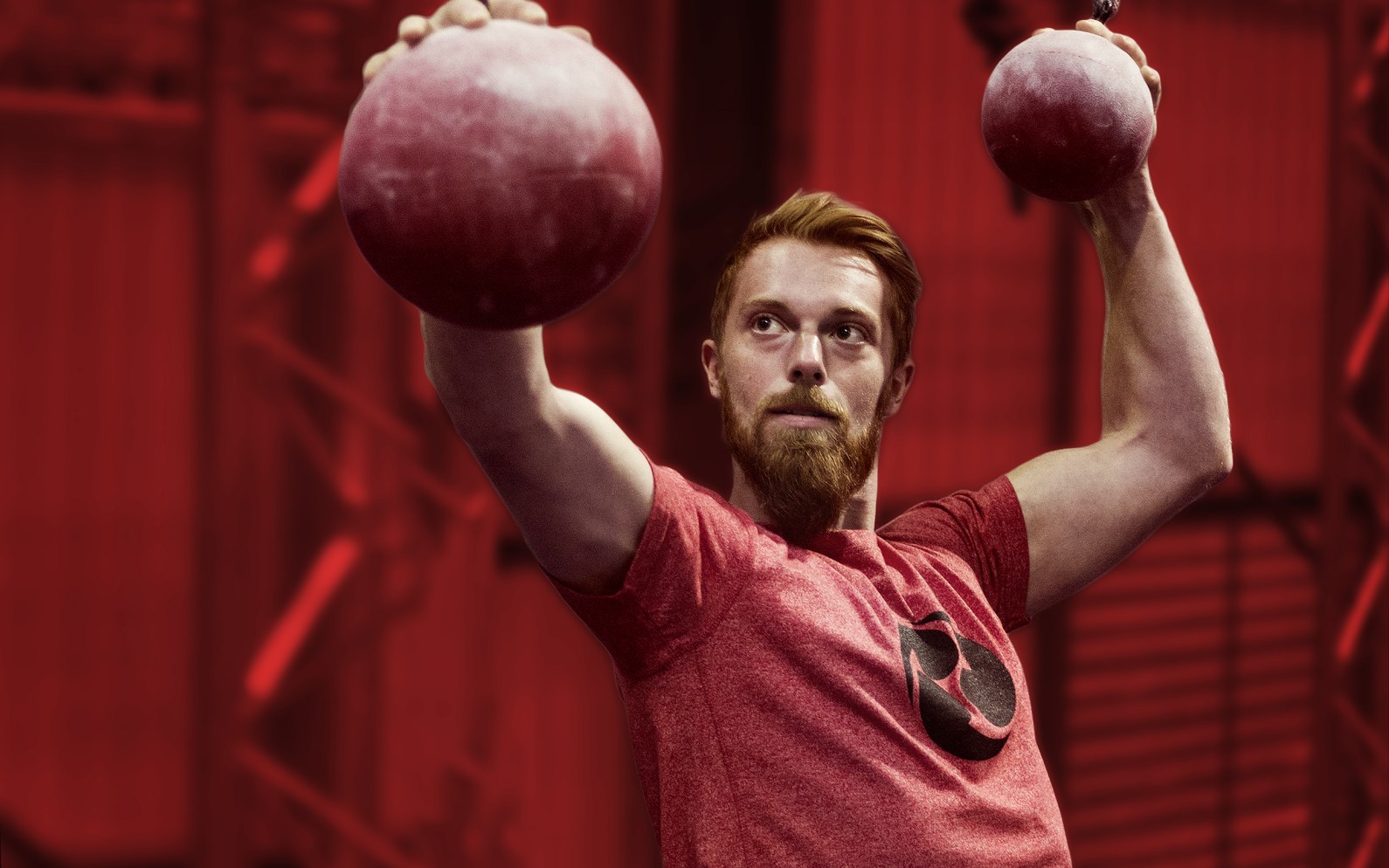 There were nerves aplenty as the competitors filtered in to take on Stage Two in the Second Qualifier on Sunday, a tribute to the stage being historically difficult.

At the Ninja Challenge Finals 2015, eight people made it through Stage One to take on the next stage, but only one proved capable of defeating it – Joshua McMurray, who would come agonizingly close to defeating the whole course afterwards.

However, with a field of 40 people taking on the course this time around, there was a cautious optimism that someone would break through again – helped by the fact that McMurray was returning to competition after an injury to take on the course only he had beaten.

Another change was the addition of a new obstacle, a take on the dreaded Body Prop, which requires competitors to bridge a gap with their bodies and shuffle the six metres between platforms without touching the floor, which replaced the Tyre Flip.

Up first was Ninja Academy founder David Ravi, who normally runs last but decided to break the ice on the qualifier this time around.

Having already booked his ticket to the Ninja Challenge Finals at the Stage One Qualifier, the older Ravi donned anAkatsuki cloak for his run to the delight of the crowd.

Despite the unorthodox attire, Ravi was unflappable in the first few obstacles, navigating the Slackline Rail, Offset Rings and Cannonball Alley with ease before pausing in front of the new Body Prop.

Having mentally rehearsed his approach, Ravi mounted the obstacle with ease, keeping his hips raised to ease the strain on his core and earning some affectionate wolf-whistles from the crowd.

After looking strong to that point, the 27-year-old fell flat on the Hanging Pipes, proving unable to get past the first pipe – which would prove to be a common problem throughout the day, with 13 others meeting their fate at the same point of the course.

The next competitor, Jason Doust gave the crowd a scare as he was unbalanced coming off the slackline at the start of Stage Two and barrelled into the Spider Walk in the adjacent Stage One with his shoulder, but thankfully wasn’t injured.

Battling dizziness from a bout of sickness, Wansbrough wobbled for a moment on the slackline, but recovered and powered through to the Offset Rings.

Taking a cautious approach on the rings, she had no difficulty clearing the second obstacle, but having only made the grab on the first Cannonball once in training, took a beat to mentally prepare herself.

Jumping with confidence, Wansbrough got a solid grip on the first ball, but slipped off and came down hard, kneeing herself in the face in the process.

After an anxious few seconds, the upbeat competitor gave the crowd a thumb’s up with one hand, while still holding her face with the other.

A student of Ido Portal, Robson had shown an aptitude for defeating the obstacles since Ninja Academy’s opening, but had resisted the lure of competition until yesterday.

Moving through the early obstacles with ease, the humble Robson predicted he would fall on the Hanging Pipes before his run began – which would prove accurate as he was unable to get past the first pipe, but took a hold of the top spot despite this.

Following Robson’s run was John Fisher, yet another rookie, who showed poise in getting across the Slackline Rail, but caught hung up on the Offset Rings, missing his grab for the third ring.

Stranded on the second ring, Fisher spent two and a half minutes fighting gravity and tired muscles, trying to generate enough momentum to reach the third ring and continue his run.

After touching the next ring twice but proving unable to make the grab, Fisher finally managed to take hold of the elusive ring, earning wild applause and roars of approval from the crowd.

Having spent so much energy already, Fisher unfortunately fell a couple of rings later, but his inspirational effort to persevere through adversity made his run one of the highlights of the day.

With a tough act to follow, Ninja Academy coach Emma Blockey, the only female competitor to defeat Stage One after doing so at the Ninja Challenge Civil War, was ready to make her debut outside of team events.

Demonstrating supreme confidence on the Slackline Rail typical of Ido Portal students, Blockey cruised through the early obstacles, but fell victim to Cannonball Alley, falling on the third cannonball.

A string of other strong competitors attempted the course, but none could get past the Hanging Pipes, with Stage One finisher Adrian Giannini being the first to make it to the second pipe and Ninja Academy support team member Caitlin Hagdorn simply bowing out without attempting the Hanging Pipes.

Hope came in the form of Donny Byrne, also known as ‘Mr Freestyle’ for visiting Ninja Academy more than some members but not having a membership, who looked strong through to the start of the Hanging Pipes.

After getting to the second pipe, Byrne did what had yet to be done and transitioned to the third pipe, managing to go one further and grabbing the fourth pipe before slipping off, much to the dismay of the eager crowd.

The finisher drought continued with the Hanging Pipes continuing to defeat competitors, with Connor Ranger’s blazing time to the start of the pipes proving no indication of his ability to defeat the dreaded obstacle.

Michael Perrella, another Ninja Challenge rookie became just the second person to reach the third pipe on the Hanging Pipes, but even his rock climbing background couldn’t get him past the obstacle.

As the number of competitors remaining dwindled, a number of top competitors from the Stage One Qualifier waited anxiously for their chance to be the first finisher.

Stage One Qualifier winner Jake Sawyer breezed through the early obstacles, despite nursing an injured wrist, but he too was ultimately undone before he could reach the Double Salmon Ladder.

But soon after was the competitor many in the crowd were waiting to see – 2015 Stage Two finisher Joshua McMurray.

After breaking his hand skateboarding right before the Stage One Qualifier, McMurray’s absence had allowed other competitors to take on the mantle of favourite, but the supremely confident climber was prepared to retake the throne.

Despite a little trouble on Cannonball Alley, McMurray was otherwise flawless in getting to the Hanging Pipes, his signature calm on display.

With bated breath the crowd watched as the man who built the course made it to the fourth pipe, equalling Donny Byrne’s feat and grabbing on to the final pipe before successfully dismounting the obstacle and preparing to be the first one to take on the Salmon Ladder.

His poise recovered, McMurray made the four jumps on the first Salmon Ladder with consummate ease before turning to make the transition to the other side.

After a few swings to build up momentum, the carpenter flew through the air, carrying the bar – and the hopes of the crowd – with him and stuck the landing, but was unable to keep hold of the bar, crashing to the floor.

With a tough act to follow, Adam Chatfield, who met an unfortunate end on the Rail Balance in the Stage One Qualifier, got past the Slackline Rail with ease and went to work on the hanging obstacles, using his incredible grip strength and light frame to destroy the early obstacles.

Approaching the Hanging Pipes, which he likes to call Cylinder City, Chatfield made it through the first two before jumping to the third and using his momentum to rush through the remaining two, getting his hands on the fifth pipe but only reaching the edge of the platform before overbalancing and falling back onto the platform.

American Connor Powell, owner of the record for fastest time on Stage One, had no more luck on Stage Two, messing up his hand placement on the second pipe and coming off on the Hanging Pipes like so many before him.

The last remaining Stage One finisher, Ben Polson had expressed some concern about the Hanging Pipes, remarking that he failed them for the first time in the week before the competition, but his high success ratio in training gave him cause for confidence.

Making it to the Hanging Pipes without any difficulty, Polson’s tall frame and long arms allowed him to reach out and grab the first pipe without his feet leaving the platform and true to form, he became the second person to defeat the obstacle and attempt the Salmon Ladders.

Showing textbook form on the first few jumps, Polson ended up crooked towards the top and had to re-align the bar before turning around for the transition to the other side.

Having fallen on the transition between Salmon Ladders in the Ninja Challenge Finals last year, Polson took his time to generate plenty of momentum, but like McMurray, was unable to hold on – once again enduring the long fall to the crash mat from the top of the Salmon Ladder.

A few walk-ons tried their hand unsuccessfully, before Mark Ravi, long-time Ninja Challenge referee closed the event with his first run since breaking his wrist in December.

Despite working constantly on Cannonball Alley in the lead up to the event before finally completing it in training, the obstacle proved too much for the younger Ravi as he missed his grab on the fourth ball, dropping to the mat, disappointed, but relieved to have booked a spot in the Ninja Challenge Finals in December.

For the first time ever, a qualifier took place without a single finisher, Stage Two remaining an almost insurmountable challenge for the field of competitors.

With the fastest time getting to the top of the Salmon Ladder, Ben Polson edged out Joshua McMurray by eight seconds to take out first place and the $100 prize, but the day’s results put everyone on notice that they needed to step up their training to earn the $1,000 prize at the Ninja Challenge Finals in December.

The Third Qualifier, held on Saturday, September 3, will feature a unique, choose-your-own-adventure format.

Competitors will choose their own path through the course with the following restrictions:

Ninja Academy encourages prospective competitors to spend time experimenting with what path works best for them – finding one that plays to their strengths and hides their weaknesses.

The Third Qualifier will be the FINAL CHANCE to qualify for the Ninja Challenge Finals course in December and compete against the best ninja athletes Perth has to offer.

DO YOU THINK YOU’RE READY FOR THE NINJA CHALLENGE?

Tickets to the Third Qualifier are available >>HERE<<.

Don’t forget to sign up before August 20 to take advantage of the early bird pricing.

Full results for the Stage Two Qualifier are below: