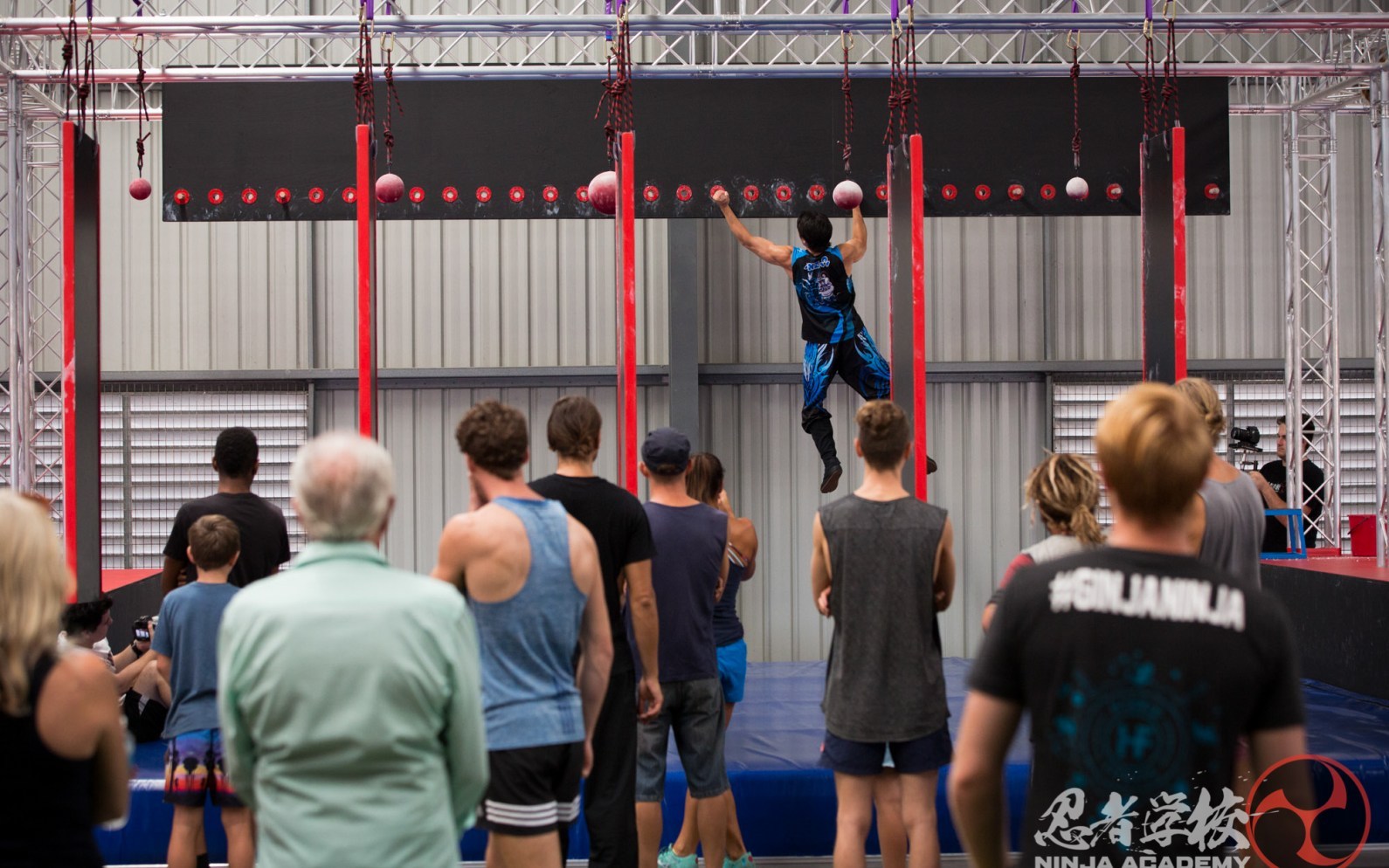 There was a nervous energy in the building as competitors filed in for Ninja Academy’s second official competition, the Stage One Qualifier on Sunday, February 28.

With more than 60 tickets sold for the event, it dwarfed the Ninja Challenge 2015 Finals in size with almost twice as many runners.

The size of the field meant the competition for the 30 spots in the Ninja Challenge 2016: Finals up for grabs – and the $100 prize for fastest run of the day – was bound to be fierce.

Stephen Aldridge – a Stage One finisher in 2015 – would get the ball rolling with the first run of the day, as he did at last year’s event.

The course was different, but the result was the same as the lanky Aldridge displayed his signature calm to deliberately work his way through the course and was the first competitor to test out the new obstacle – the Devil Steps to Teeter Monkey – which he passed on his way to finishing the stage.

Up next was highly anticipated female competitor and Ninja Academy staff member Caitlin Hagdorn, who was considered a strong possibility to finish the course.

However, it wasn’t meant to be as Hagdorn, having worked her way to the end of the Monkey Pegs, couldn’t muster the energy to use the final peg before dismounting the obstacle, resulting in elimination – a fate shared by fellow Ninja Academy staff member Bryce Twyman and Jesse Woo later on.

The next to step up was Adrian “Gentle Palm” Giannini, a dynamic bundle of muscle and power who had the prize money firmly on his mind when he raced to finish the course and wrest the lead from Aldridge with a time of just over two minutes.

Sawyer, 24, was making his Ninja Challenge debut, but had been putting up blistering times on Stage One in training leading up to the event and was considered one of the favourites to put up the fastest time.

The athletic accountant did not disappoint, blasting through the first few obstacles in amazing time, demonstrating his incredible laddering technique on the rings, but paused on the bar at the end of the Devil Steps to recover after being surprised to find that it rotated.

But the tricky bar proved no great deterrent to Sawyer, who quickly figured it out and raced up the Warped Wall to finish with a time of 01:19:09 – breaking the Stage One record set by Joshua McMurray at Ninja Challenge 2015 by over two seconds.

With a new record in the books, Sawyer had officially put the crowd on notice that wresting the $100 prize from his grasp would be no mean feat.

With the bar set so high, the next female competitor, Ebony Regan, had her run end almost immediately when she stepped on the blue mat while trying to reach the first Quintuple Step, a costly mistake which would unfortunately be repeated by six other competitors throughout the day.

Next up was architect Ryan Thomas, who had fallen on the Monkey Pegs in the Ninja Challenge 2015, and he seized his chance at redemption with both hands, powering through the obstacle before ultimately falling on the Devil Steps.

The strong performances kept coming early, with rookie competitor Daniel Burgess a surprise finisher after having tried the course only once before competing, but his finishing run almost ended before it began after Burgess came within millimetres of stepping on the blue mat on his first step to the Quintuple Steps.Burgess would be the last finisher for some time, with a wave of competitors falling short, including Ninja Academy coach Matt Dewson, who couldn’t transition from the Devil Steps to the Teeter Monkey.

The finishing drought ended with 27-year-old rookie Anthony Dumlao, who blitzed through the Spider Walk and Monkey Pegs, but had to make a desperate leap to the platform on the Rail Balance after losing his footing before becoming the fifth person to complete the stage for the day.

Anthony Dumlao was one of several competitors to survive the Rail Balance on a leap of faith.
PHOTO: Brodie Butler

In one of the final runs before lunch, first-timer Samuel Samulela captivated the audience when, after missing a grab on the rings, he held on valiantly for more than a minute trying to recover in an amazing feat of grip strength and determination, before ultimately crashing to the mat.

The crowd didn’t have to wait long for the first finisher of the afternoon session, with the dreadlocked Andre Rerekura racing through the course, his limited reach not preventing him from transitioning from the Devil Steps to the Teeter Monkey with relative ease.

Soon after, Jordan Tocknell, a regular participant in Ninja Academy’s Elements classes, put the skills he learned to the test on the course, powering through the obstacles to put up a time of 01:44:87.

Tocknell’s success was followed soon after by Robin Schmeider, who cruised through the course in under three minutes, maintaining a calm demeanour throughout.

As the youngest competitor of the day, 16-year-old Titan Webster won over the crowd with his gutsy performance on the course, reaching the Devil Steps bar through sheer will before his arms gave out.

Up next was Paul Ranger, who had awed the crowd at Ninja Challenge 2015 with his inventive approach to defeating the Spider Walk with one hand in a cast and was excited to compete with both arms in working order.

Ranger breezed past the Monkey Pegs that had proved beyond his one-armed capabilities and reached the top of the Devil Steps, but couldn’t transition across to begin his descent and fell, but the exhausted 28-year-old was just happy to have competed in good health.

Up next was Adam Chatfield, a promising competitor who had completed Stage One several times in training for the event, but was competing for the first time.

After a flying start, Chatfield was forced to halt at the start of the Monkey Pegs, as Ninja Academy judge Mark Ravi had failed to reset the pegs after the last competitor in what was the only major error in a full day of competition

Although Chatfield passed the Monkey Pegs when his run resumed, the damage to his concentration proved fatal as he failed on the Rail Balance.

He graciously accepted aa second run, but was once again unsuccessful on the Rail Balance, with the mistake by the judge serving as the low point of the day.

With the mood low after Chatfield’s unsuccessful runs, it was up to Bowen Wilkinson to perk up the crowd.

A walk-on last year who finished Stage One without breaking a sweat, Wilkinson was determined to represent the calisthenics community well on the updated Stage One.

Once again taking on the course with a relaxed attitude, the usually collected Wilkinson had to make a desperate lunge on the Rail Balance after losing his footing – before sailing through the last three obstacles to finish Stage One a second time.

With the event drawing to a close, the crowd was anxious to see whether anyone could top Jake Sawyer’s outstanding time and take his long-held lead from him.

Amos Lam, one of 17 entrants defeated by the new Devil Steps to Teeter Monkey, is helped up by the judge.
PHOTO: Brodie Butler

If anyone could do it, it would be Ben Polson, who was taller than Sawyer and as one of the top performers at Ninja Challenge 2015, more experienced than the outstanding rookie.

Throwing a wink at the cameras before his run, the confident Polson blazed through the Quintuple Steps with unmatched speed, but lost some time on the Spider Walk, where his lanky frame worked against him.

Tearing through the remaining obstacles, a drained Polson ultimately fell just short of Sawyer’s time at 01:23:06.

Up next was Ninja Academy staff member Connor Powell, a US import who competed against many contestants on American Ninja Warrior in his homeland.

Competing on Australian soil for the first time, Powell was determined to put up a strong time as he waits to find out whether he qualified for the upcoming season of American Ninja Warrior.

Pushing the pace on the early obstacles, the “Ginja Ninja” saved time on the Monkey Pegs by swinging to the last set of fixed pegs early.

Opting against laddering on the rings, Powell finished the course with relative ease, but having not trained for 3 months, he couldn’t match the speed of Polson and Sawyer and was forced to settle for the third-fastest run of the day.

Last to run on the day was Ninja Academy founder David Ravi, a Stage One finisher in 2015 who scraped through just under the time limit in that event.

With no time limit for the Stage One Qualifier, Ravi took his time, approaching each obstacle methodically to ensure successful completion as the gathered crowd urged him on.

Despite putting up the slowest time of the finishers at just under four minutes, the former accountant booked a spot in the Ninja Challenge 2016: Finals with his deliberate approach and became one of only four people to complete Stage One in both events.

It was a day filled with heartbreak, triumph, and exhaustion, the reward for the top 30 performers a spot in the Ninja Challenge Finals in November, while those who missed out looked ahead to the Stage Two Qualifier in May, hoping to improve their fortunes.

DO YOU THINK YOU’RE READY FOR THE NINJA CHALLENGE?

Tickets to the Stage Two Qualifier are available HERE.

Don’t forget to sign up before May 15 to take advantage of the early bird pricing.

Full results for the Stage One Qualifier are below: